You might have noticed that many sedans in South Korea are using LPG (Liquid Petroleum Gas). YF Sonata and K5 LPi are very popular in South Korea, since LPG is much cheaper than gasoline in Korea. Therefore the Korean Manufacturers, Hyundai and Kia have developed LPG engines during a long time and now they have boosted their highest quality of new type of engine, called LPi (Liquid Propane Injection). LPi engines inject LPG directly to engine as a GDI (Gasoline Direct Injection) engine. So it has better fuel efficiency and power than LPG engines which vaporizes gas into the engine. Definitely LPi does not have ignition problem which was one of the main complaints of LPG engines.

LPi engines have been installed into Hyundai NF Sonata, YF Sonata, Avante, Kia Lotze and K5 since 2004. These cars were very common in Korea, they were mainly used to be Taxi cars, Rental cars and Handicapped vehicles. Since LPi and GDi engines are similar among each other, many overseas customers prefer to convert fuel system from LPG to Gasoline and enjoy the price benefits of cars. Fuel Conversion (LPG to Gasoline) is one of the most common works for exporting cars. You can get fuel conversion (LPG to Gasoline) at reasonable price when you use Autowini's Safe Payment & Shipping Service B.I.S. 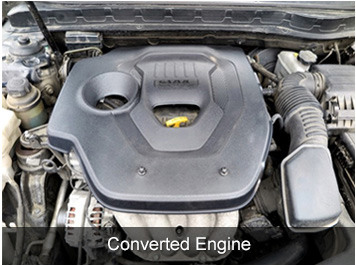 Choose your items & give us Item No. & your full contact information and then asking "Fuel Conversion (LPG to Gasoline)". Email : help@autowini.com